Being a direct descendent of Shito-Ryu, Shukokai inherits the characteristics of both the Naha-te and Shuri-te styles of Okinawan Karate. Kenwa Mabuni merged the techniques and principles of the styles he learned from his teachers Kanryu Higaonna, and Anko Itosu to form his Shito-Ryu style of Karate. As such, Shukokai combines the circular breathing techniques from Naha-te and the quick linear movements of the Shuri-te styles. This is apparent in the katas performed within Shukokai.

Katas like Sanchin, Tensho, and Seienchin are handed down from the Naha-te traditions, while katas like Annanko, Matsukaze, and Bassai-Dai are handed down from the Shuri-te traditions. Upon close examination, one can see the similarities between Tensho, Sanchin, and Seienchin, and the similarities between Bassai-Dai, Annanko, and Matsukaze, and what makes the Naha-te katas different from the Shuri-te katas.

Master Mabuni's experience with both the Naha-te and Shuri -te styles was why he was renowned throughout Japan and Okinawa as the foremost expert on kata. Another attribute that distinguishes Shukokai Karate from other styles is the execution of techniques. While Shukokai shares many of the same punches, kicks, and blocks found in other popular styles of Karate, it is in how these are executed that sets Shukokai apart.

Sensei Tani sought to perfect his style by studying the mechanics of the human body and developed techniques which can be delivered with maximum efficiency.  Over a long period of time Sensei Tani evolved and developed Shukokai. He always laid stress on the importance of etiquette, discipline and mental control and was at pains constantly to promote the improvement of technique.

When Sensei Tani retired as Chief Technical Director he appointed Shigeru Kimura (9th Dan) as his successor. Sensei Kimura had won the World All-Styles Championship when only 21 years of age and had twice been the All-Japan champion before retiring from active competition. 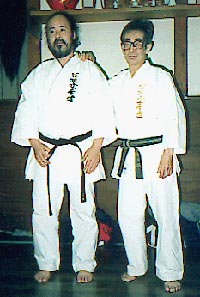 Master Kimura and Master Tani
Sensei Tani and Sensei Kimura made their greatest contributions to the style by continually refining each technique to the highest degree, essentially re-defining the basics that had been practiced for centuries. Both made the study of body mechanics their primary focus with the end result being the delivery of the greatest impact with the least amount of effort

Another defining characteristic is that each technique must be combat-effective. Sensei Kimura believed that a
technique, no matter how powerful, was useless if it could not be delivered under combat situations.

His philosophy was that the outcome of a confrontation should be decided in a single technique, as per the way
of the samurais of old. This drove him to continually modify and test his technique throughout the course of his
life with the end result being the traditional, yet combat-effective style of Karate we call  Shukokai.

Every technique executed within Shukokai has these defining principles at their very core. 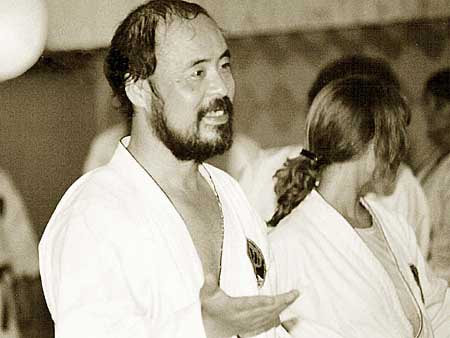 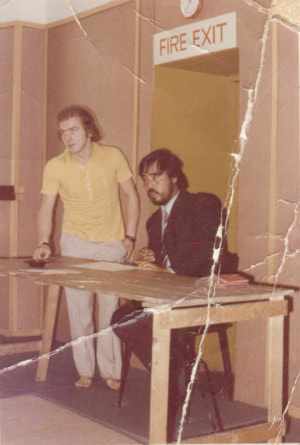 Sensei  Jim and Carol Miller Registered the name (The Shukokai Karate Club) and opened their
first club in August 1977.

Interview with the late Master Kimura